The Warringal Parklands playground didn’t come about by accident. It is part of a longer term strategy to develop a series of regional playspaces in Banyule which has its roots in Council’s Public Open Space Strategy.

In 2008 Jenny took a tour of the playground in Manningham Council’s Wombat Park.

She said that day to a Council officer that she wanted one for Warringal Parklands.   And so the idea was formulated that day and four years later due to the driving force of Cr. Jenny Mulholland has become a reality.  This wonderful playspace is in fact the third regional family play facility developed by Council. Part of Council’s strategy around regional play facilities is to build each with a different theme in order to give families the opportunity to have a variety of experiences with their children.

For instance Malahang Regional Playspace in Heidelberg West has an underlying Olympic theme to reflect the area’s heritage of being the site of the athletes village for the Melbourne Olympic Games in 1956.

The Binnak Park Regional Family Playspace in Watsonia North, has an indigenous theme.

The Warringal Park Regional Family Playspace has been designed and built with an environmental theme to reflect its surroundings. 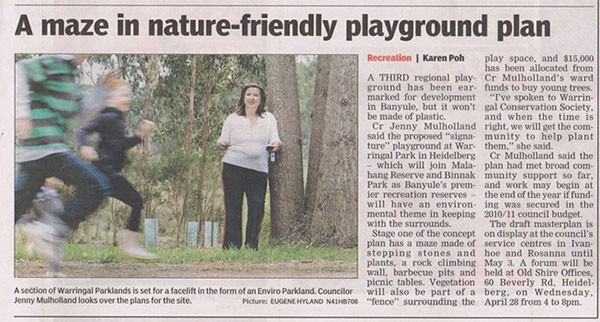 This is a family friendly facility. The aim of these regional playspaces is to provide a range of facilities that will offer something for the whole family and enable families to play together and enjoy these wonderful surrounding for hours at a time.

The State Govt contributed $210,400 which equates to approximately a quarter of the overall cost of the project. Whilst Council has obviously met the lions’ share of the cost, it is fair to say that without the support of Sport and Recreation Victoria the project only had funding for stage but the condition of the State Govt was that it must not be built in stages

Jenny had to lobby other Councillors to make sure the a second round of funding was provided by Council.

Contributions made to the project are acknowledged: 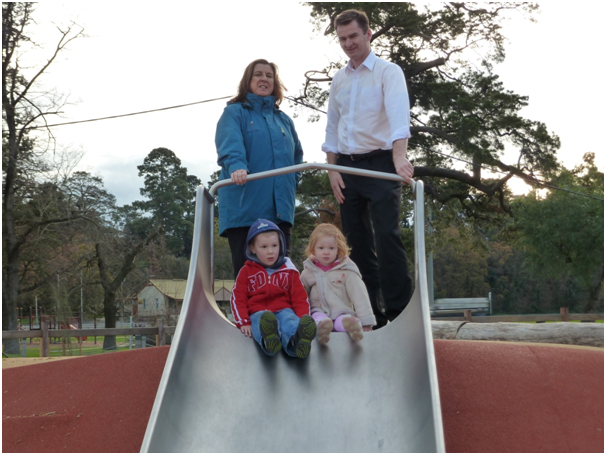 “The new Warringal Park playground is a great family facility.  It was an idea formulated by Jenny Mulholland in 2008 and it is a credit to her vision and planning skills that this project has become a reality in 2012.  We need more Councillors like Jenny Mulholland.”